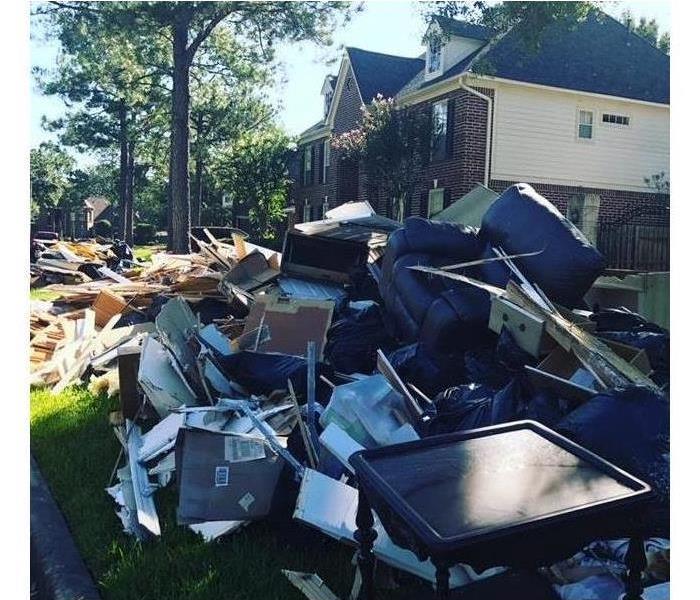 A home in Houston ravaged by Hurricane Harvey

It has been nearly a year since SERVPRO of NE Long Beach/Lakewood packed up three trucks to make the drive from Long Beach, California to Houston, Texas to help with water damage repair cleanup from Hurricane Harvey.  So, what was it like?

The drive took three full days due to the heavy equipment we carried with us.  As we came closer to Houston, we had trouble fueling up our diesel truck.  Driving from small town gas station to small town gas station along our route, we were met with signs over the gas nozzles announcing “Out of Fuel.”   The lines were very long, with tempers flaring as locals and long-distance truck drivers competed to fill up their vehicles.

On Day 3 we made it to Houston in the afternoon.  The traffic was terrible – and this is someone from Los Angeles saying this.  There were many main roads that were still underwater, some looking like rivers as we passed them.  We were fortunate to have a friend with a small apartment in Southeast Houston that we could stay at.  It became our office, kitchen, and sleeping quarters.  A hotel was rented for our technicians who flew in to help with the cleanup work.

The first couple days in Houston was spent organizing supplies, getting the layout of the city, and generally preparing to get started on the work.  SERVPRO Storm Team started to send us a steady flow of work after about 4 days.  Now, when you are responding to storm damaged homes, there is only so much preparation you can do beforehand.  The real problem solving happens in the field once you have your boots on the ground.

The first impression I had when we started working was the great resourcefulness of Texans.  Friends and neighbors came to each other’s aid to help pull out damaged furniture, remove drywall, and provide moral support and humor.  Driving down neighborhoods, we saw piles of drywall, clothing, and furniture piled high in front yards.  After a few days of trash not being cleared, the smell started to fill the humid air.  The odor was like what you experience when you clean out a dirty fish tank.  Many cars were unusable due to being flooded, so they sat with steamy windows until the towing companies could come through to take them to the junk yards.  Despite all this, restaurants were open, Home Depot and Loews were open for business, and people went about their days as best they could, patching the city back together.

The worst houses we worked on were the ones that had been completely swept through with mud.  Imagine a tidal wave of mud floating through the entire downstairs of your home.  The water lines were taller than me on some of the homes.  The mud was everywhere – caked on the floors, on the wall studs behind the drywall, on furniture and clothing.  We would remove the furniture, the affected drywall, complete a pressure washing of all the surfaces while extracting the runoff, and then finish by hand wiping, vacuuming, and mopping all the affected areas at least one or more times.  The final treatment would be an antimicrobial application.

The customers with the most badly affected homes were the nicest and most grateful.  When they could have been angry at their circumstances, they instead showed gratitude.  Our crews put in long days with a smile fueled by the good attitudes of our customers.  Even the massive number of mosquitoes from all the standing water couldn’t keep us down.

After a month in Houston, we made the long ride back to Los Angeles.  The home office ran smoothly in our absence, thanks to our wonderful General Manager and the crews that stayed behind.  It was a great adventure.  We hoped to have some much-needed downtime when we got back, but Mother Nature had other plans.  We returned home to blazing wildfires in Los Angeles and Orange County.  Off to help with the fire damage cleanup we went because at  SERVPRO of NE Long Beach/Lakewood we are here to help with fire damage repair and water damage repair both on the road and in our own backyard.